FatStick have become aware of some heart warming stories from real people, with real reasons to Paddle. We like to say the SUPing is ‘good for the soul’, however, it appears that it’s good for the body and mind too. We will be featuring some inspiriational ‘real life’ stories from some great folk who wanted to share their reasons as to why they grabbed a paddle.

From time to time you meet people that make you realise that life isn’t always so bad and there are reasons to be grateful.

We had the pleasure of talking with Liz Dennett – a Paddle Boarder from the north, Liverpool to be exact. What a lady and what an outlook. Liz suffers from Parkinson’s Disease which became apparent after she suffered a nasty fall whilst out running. Having run regularly for fun and in marathons for 10 years, Liz was worried that she would end up sitting in the house, lonely and inactive. The decision was made that they would add to the family and found ‘Parker the Terrier’ for company.

“Parker was supposed to be my lap dog and keep me company. I soon realised that Parker wasn’t going to sit on anyone’s lap, let alone sit still” Liz said. As such the decision was made that she would start running again and Parker would be by her side. Liz found a group of ladies who all ran with their dogs and Liz was back, with the mind-set that Parkinson’s wouldn’t be beating her. The group grew as did their activities. Running led to cycling which progressed to swimming and at this point, the question was asked ‘What shall we do next’?

Liz told us that someone mentioned Paddle Boarding, to which Liz quickly responded with “That’s a stupid idea”. Being part of the group and not wanting to let the ladies down, Liz committed and they all paid for a lesson. Liz’s instructor chose the right board and the right time to tell Liz ‘now’s the time to stand’ – so Liz did as she was told and the rest is history.

Now firmly hooked, Liz loves to paddle and when asked ‘Why do you paddle?’ Her response was perfect; “You get out what you put in, as with everything in life. I don’t like swimming, but love the water so what better way to have the best of both worlds”. Describing SUPing as cathartic, Liz gets an enormous sense of satisfaction from Paddle Boarding.

Parkinson’s sufferers are known to suffer from depression as a by-product of the disease and this is due to a lack of dopamine produced by the brain. Dopamine in its simplest terms is the ‘feel good hormone’ – as such, with a lack of dopamine those with Parkinson’s are susceptible to the effects of depression. Liz told us “I feel good every time I paddle. By paddling and feeling good, I am taking part in a great rehabilitation activity”. She added “By paddling my body is in better condition and the repeated movement of paddling is also beneficial” – “best thing is, I get to take Parker with me whenever I paddle. He’s my little right-hand man. My Pup on a SUP”.

With Liz firmly in the world of Paddling now, we had to ask her why she chose FatStick? “Why wouldn’t I”? The answer was a little unorthodox but encapsulated FatStick’s ‘why’ we do it.

Liz spent days trawling the net looking for the right board for the right price. “I didn’t want to buy cheap and then buy again, but I wasn’t going to spend silly money” Liz said. With her research in hand, she found the FatStick website. She chose her board and her paddle package and added it to her basket – job done! But that wasn’t that case. There was an error somewhere and Liz ended up with 10 boards and was unable to make changes so took to email and contacted FatStick to moan and tell them that they’d lost a customer. Moments later she received an email from Reuben May, FatStick’s Main Man. He was calm, kind and apologised for the error. Having read Liz’s email and knowing just how much she wanted a board, Reuben carried on the conversation and fixed the issue by arranging the board over email.

This is how it should be though? We asked. “Not quite” replied Liz, “this was 8.30pm on a Friday night! I had the owner of the company talking to me personally, no call centre involved and arranging the board for me. Better still, he made sure that I received it ASAP”. Liz told us that it wasn’t just how the board looked or the reviews, but Reuben. He was the deciding factor. FatStick being a UK company with a personal touch made up her mind.

What’s next for Liz?

So what’s next for the Marathon Running, Cycling, Swimming and SUPing Liz? Well, as to be expected there is something – Liz is taking part in a Triathlon in Bedfordshire, however, she has been attracted to a Triathlon that uses SUPs instead of the swimming section. We’ve been promised that we’ll be kept up to date if this happens.

So, to our last question. What board do you paddle and are you happy? The answer? “A Pink Panther with customised Paw Print decals and a further sticker that says ‘Parker On Board – #SUPDOG’ and no, I’m not happy”

Why aren’t you happy?!

Through a laugh, Liz revealed, “I need a Pink Paddle to go with my amazing board”. 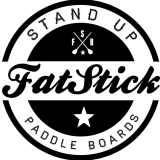